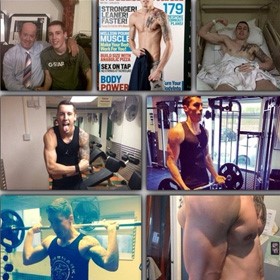 My name’s James Reid, I am 23 years old and have been training at Total fitness since I was 16.

In 2011, at the age of 19, I was diagnosed with Crohn’s Disease. 1st July 2011 is the day that changed the rest of my life. Before the diagnosis I was a strong, fit person, I boxed for Sefton ABC and keeping fit was important to me.

I went on to represent the Midlands team in Gibraltar. The 1st May 2011 was my last fight. The 2 months before getting rushed to hospital (July August) were a very hard struggle for me.

I live with my brother, and at that time he lost his job and broke up with his girlfriend. It became a big responsibility for me to help keep our house and I was working 12-hour shifts at McDonalds, struggling with money and trying to pay rent and bills, I chose to only eat the food there because it was free. My attitude at the time was 'I can eat what I want and won't put on weight' - this would lead on to my self-destruction.

I'd try to fit in training between my 12-hour shifts, 5/6 days a week. I didn't want to stop training because going through these tough times caused a lot of stress and training was a salvation to me.

One day, I was rushed to hospital coming back from training. My bowels were severely flared up to the point I was at risk of dying if an emergency operation didn't happen. After a week in hospital they let me go home.

I was at home 11 days before being rushed back. My scars had broke open from infection, causing my stomach to open up. These infections would go on for a year. I spent 3 months in hospital and got out in December 2011 before Christmas. I'd gone from 70kg to 57kg.

Tests revealed it was Crohn's disease. They said I couldn't fight it, which broke my heart. I tried going back in to the gym but it was a struggle. I was very anaemic so I was always tired and slept all day because of the lack of iron.

Eventually I gave up. For the first (and last time) I gave up on life. Until one day, after a few months of feeling sorry for myself, I got up, brushed myself off and got back in touch with a friend. He's also a nurse and a PT. He got me right back in and we researched Chron’s Disease, trying to find loopholes on how I can deal with it. We totally changed my diet and training. We found out that I needed low white blood cells and training helped this, so going to the gym became essential in the end. I began to put weight on slowly and started seeing my body develop, but it was always a struggle. I'd have flare ups and lose everything I'd gained, dropping rapidly back to 57kg. It was an up hill battle, physically and mentally.

In July 2013 the doctors gave up with the medicine and gave me more surgery, vital with my body deteriorating from the infections and the flare-ups. They operated and put on colostomy bags. I've felt human since 2013. I can finally get out of bed without a struggle or pain.

I can now put on weight and keep it on, and they gave me permission to box again. I still keep to my diet and my workouts, it helps keep Crohn’s away a bit longer before it comes back. So it's important that I train not just to get big or fit but to help me medically. It's my fortress of solitude were I come to get away from the world. For that hour or two I forget that I have this chronic disease which can come back without warning. I always tell people 'iron and loud music is the best therapy.'