From Wheelchair to Walking

Our Aintree member Mike is a true inspiration. In 1992, aged 28, he fell 100ft from a mountain. He was on life support and was told he had a brain injury in the Cerebellum, a part of the brain that controls balance, coordination and fine muscle control.

Doctors told him he would never walk again, but he had the ambition to walk at his sisters' wedding in 1996. Through sheer determination and hard work he achieved this overwhelming goal. With the support from friends and family, he now drives, walks with a Zimmer frame and swims.

He trains in the gym most days and is known by the whole team for having a positive and friendly personality. An Everton fan through and through, Mike said 'every Blue wants to be on top of a Red!' He's achieved this by conquering Ayres rock in Australia. An incredible accomplishment. Before his accident, Mike had completed three marathons and was training for a triathlon.

Mike, we take our hat off to you. You are one of a kind and you never fail to amaze us. Thank you for training at Total Fitness, you're a real inspiration. 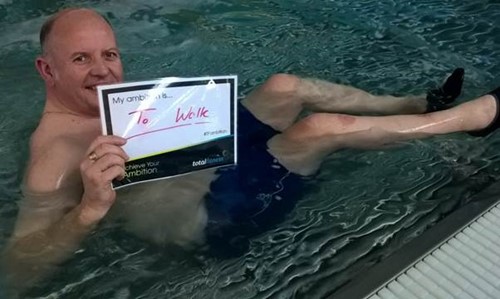