What's it really like to train for the Olympics? Becky Adlington shares her experience...

When people think of swimmers they often think about the early morning training sessions, the 5am starts in the pool before school or work. The stories of parents having to take their kids…and how awful that must be…but for me it was the training that I loved best. It was the competition and racing which was hard work.

In the build up to a major international meet like the Europeans, World Championship or Olympics I would be training at least 70,000 metres a week then there would be the gym sessions, strict diets to stick to (usually!) -  a controlled program of exercise and rest which allowed me to peak at the right time…

It was a routine which is just like having a job - well, it WAS my job!

All that time for all those miles of swimming for, sometimes, only 2 swims which really counted in a full year. It's a 4 year cycle. One year World Championships, next Commonwealth Games & Europeans then another World Championships, finally Europeans, and Olympics. Everything you do, day in day out, month in month out, looking after yourself, giving up the nights out etc, for just a few minutes of competition each year. When you look at it, not many sports have such a top heavy ratio of training versus performance. No wonder that, when it came to the big races - especially later in my career - I could be a bag of nerves.

As I got better, the level of expectation on my shoulders from the media, the public, friends and family and, of course myself, became very high. This was particularly the case in London 2012. After I had won 2 Gold Medals in Beijing 4 years earlier, I was made the publics’ favourite to win again, even though I knew it was going to be incredibly tough. Seeing your face on the side of London buses, roadside billboards and on the back pages of the papers might be nice for some people, for me it all added to the pressure. But in the end, the training and the hard work paid off. In my 400metres freestyle final I swam faster than I had done in Beijing. I got my medals - not Gold this time - but it’s an incredible achievement to win a medal every time I competed in an Olympic event and something I will always be proud of.

This time I will be able to relax at the Olympics for once. As a member of the BBC Television team, I will not get the nerves and the worry. But I won’t be getting any medals either…and I know I will miss the fun and camaraderie of the Olympic Village. 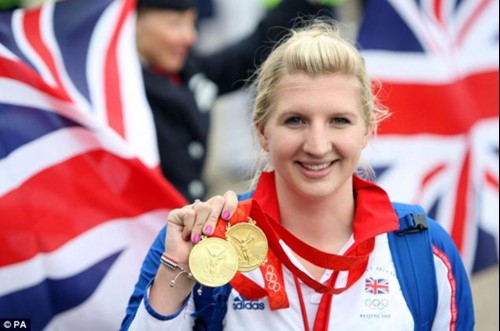